Regulation 2 of COSHH1 states that any dust when present in the workplace at a concentration in air equal to or greater than 10 mg/m3
of inhalable dust or 4 mg/m3 of respirable (as a time-weighted average over an 8-hour period) is considered to be a substance hazardous to health. If the concentration of dust in a workplace exceeds these figures then the requirements of COSHH will apply, including the need to assess the risk to workers and to ensure exposure is prevented or adequately controlled.

The 10 and 4 mg/m3 values are NOT Workplace Exposure Limits (WELs), but, in practice, they are widely used as such by many occupational hygienists for “low toxicity dusts” where a WEL hasn’t been set. This seems like a reasonable thing too do, particularly as these values have been used where WELs have been set for dusts of low toxicity, such as aluminium oxide, barium sulphate and  titanium dioxide.

However, recently, serious doubts have been expressed as to whether this approach is valid and appropriate to protect the health of workers exposed to airborne dust. There is evidence from both animal experiments and industrial experience that relatively low exposure, well below these levels, to “low toxicity” dust (the UK Health and Safety Executive now prefer the term “poorly soluble dusts of limited cytotoxicity”) may cause adverse effects. 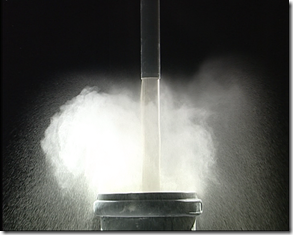 At their annual Conference in Cardiff earlier this year, the British Occupational Hygiene Society (BOHS) held a workshop on “low toxicity dusts” to try to advance the debate. The presentations, which summarise the key points made by the speakers can be downloaded from the BOHS website here. The presentations by John Cherrie and Alistair Hay are particularly informative.

Exposure to high concentrations of any dust can overload the normal clearance mechanisms in the lung, leading to inflammation and possible lasting effects. In particular, there is evidence that exposure to many dusts can cause or worsen chronic obstructive pulmonary disease (COPD). According to HSE, 15% of the risk of chronic obstructive pulmonary disease (COPD) is attributable to gases, dusts, vapours, and fumes at work, and 4000 COPD-related deaths in England are due to workplace exposures. High lung burdens of “low toxicity dusts” can also prevent clearance of other, more toxic, particles, leading to a higher risk of other lung diseases.

Too much of any substance will cause harm. The question is, what is “too much”? Unfortunately, for “low toxicity dusts” the evidence is relatively limited.

In 1999 the HSE published a Contract Research Report of work carried out by the Institute of Occupational Medicine (IOM). They developed a mathematical model based on animal experiments  to estimate the no-adverse effect level (the NOAEL) for titanium dioxide, based on avoiding the impairment of dust clearance and the beginning of inflammation. Using the model they derived a human NOAEL of 1.3 mg/m3 .

In his presentation at the BOHS workshop Alastair hay discussed an IOM study on coal-miners, which found that 35 years exposure to 4 mg/m3 respirable could lead to 17% of non-smoking workers experiencing an FEV12 loss of almost a litre, compared with 10% in a non-dust exposed population

The HSE’s Advisory Committee on Toxic Substances (ACTS), considered low toxicity dusts in 2006/7. The outcome was that they decided to take no further action other than to recommend an awareness raising campaign for those exposed to dusts to highlight possible risks to health. A number of independent experts and the Trade Unions were not happy with this decision.

There is also concern about whether the mass concentration is the most appropriate way of evaluating the degree of risk from dust which is probably related to surface area. Exposure to small particles will have a greater effect than the same mass of larger particles of the same dust.

The charts show a fairly clear linear relationship between surface area and inflammation, irrespective of the type of dust.

I suspect that the majority of occupational hygienists who attended the workshop came away convinced that applying limits of 10 mg/m3
for inhalable dust and 4 mg/m3  for respirable dust, whether they are “official” or not, is no longer appropriate. So what limit should be applied to these dusts? I’ll return to this in another post.

1 the Control of Substances Hazardous to Health Regulations

2 FEV1 is the “Forced expiratory volume in one second”. This is the amount of air that can forcefully exhaled in one second

I'm a consultant and trainer specialising in the recognition, evaluation and control of health hazards in the workplace. I'm based in the North West of England, but am willing to travel (almost) anywhere View more posts